The report “Brewing Ingredients Market by Source (Malt Extract, Adjuncts/Grains, Hops, Beer Yeast, and Beer Additives), Brewery Size (Macro Brewery and Craft Brewery), Form (Dry and Liquid), and Region – Global Forecast to 2026″, The market for brewing ingredients is estimated at USD 34.5 Million in 2021; it is projected to grow at a CAGR of 6.8% to reach USD 47.9 Million by 2026. Asia Pacific accounted for the largest share; during the forecast period, in terms of value. The Asia Pacific economies are set to witness rapid economic growth and increase in the adoption of western lifestyles, which would fuel the consumption of beer in the next five years. Increasing disposable income and rising consumption of alcoholic beverages for recreational purposes influence the demand for these brewing ingredients in the market. 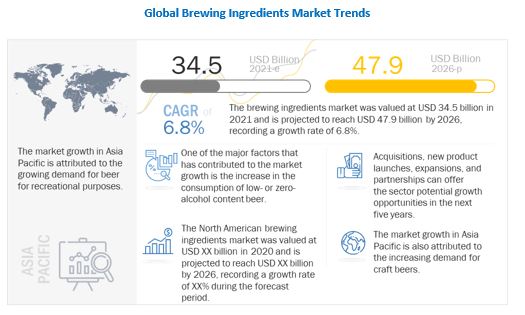 The malt extract segment by source is projected to achieve the fastest growth in the brewing ingredients market.

The malt extract is the fastest-growing segment source type during the forecast period. Increasing use of specilaity malts is projected to boost the market of the malt extract segment. These malts often have a longer time in the kiln, at higher temperatures, or get roasted to add depth, complexity, and flavor to the resulting beer. Specialty malts include less in the way of sugars but have a greater influence on the color of the beer. These malts are widely used in craft beers.

By brewery size, the macro brewery segment is projected to account for the largest market share in the brewing ingredients market.

Macro brewery leads the global market owing to its large consumption globally. Macro brew is mass-produced beer brewed in very large quantities, due to which it is generally sold for a cheaper price than craft beer. Beers produced on a large scale in macro breweries are typically monotone in flavor and go through a standardized process of production, including filtration and pasteurization.

The dry segment by form is projected to account for the largest market share of the brewing ingredients market over the forecast period.

The dry segment is projected to account for the largest share. Increased shelf life of brewing ingredients in the dry form is projected to foster the growth of the segment. Because of the lower water content, dried malt extract tends to have a better shelf life without the darkening issues of light malt extract.

Asia Pacific is projected to be the fastest growing market.

The Asia Pacific market is projected to grow at the highest CAGR during forecast period. The high growth rate is supported by various factors such as growing urbanization, increasing disposable income and increasing population in countries such as India and China.

The key players in this market include Cargill, Incorporated (US), Angel Yeast Co. Ltd. (China), Boortmalt (Belgium), Malteurop Groupe (France), Rahr Corporation (US), Lallemand Inc. (Canada), Viking Malt (Sweden), Lesaffre (France), Maltexco S.A. (Chile), and Simpsons Malt (UK). These players in this market are focusing on increasing their presence through new product launches and expansions. These companies have a strong presence in North America, Asia Pacific and Europe. They also have manufacturing facilities along with strong distribution networks across these regions.

Shivam SinghBusinessJune 7, 2022
The global 4K and 8K Ultra HD TVs market is expected to reach USD XX million by 2030, registering a CAGR of XX% during the …
END_OF_DOCUMENT_TOKEN_TO_BE_REPLACED