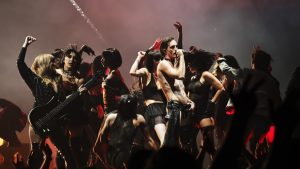 Damiano David’s ass-less chaps were about all TV viewers saw of Måneskin’s “Supermodel” performance at the MTV VMAs 2022 Sunday night after a wardrobe malfunction.

Just a few seconds into their performance, the network cut away to a visual of empty seats for about 40 seconds after their bassist top appeared to fall off, causing her breast to be fully exposed.

According to photos, Victoria De Angelis had moved to the front of the stage as a crowd of dancers surrounded the band.

However, as everyone jumped and danced, her top pooled around her waist, completely exposing her.

But, because the show must go on, the 22-year-old simply kept playing the bass, which caused the cameras to turn away from the band.

Fans, who had no knowledge of the wardrobe malfunction, immediately turned to Twitter to express confusion — and disappointment — with MTV’s creative decision.

“kinda f–ked that you cut them off just bc [sic] vic’s top,” observed another. “you didn’t even change the camera to the other three members just fully censored them. unfair.”

While the in-person audience could see the Italian rock band’s performance, viewers at home were treated only to David’s spicy pants choice as he gyrated his hips throughout the performance.

“We see you, @thisismaneskin! 🍑 #VMAs,” MTV News tweeted alongside of Damiano’s booty shake.

Earlier in the night, the group notched their first VMA win for best alternative video for “I Wanna Be Your Slave.”

After Maneskin member Victoria De Angelis flaunted her Lil Kim circa 1999 VMA-inspired outfit on the red carpet at the 2022 MTV VMAs on Sunday (Aug. 28), it was her bandmate Damiano David’s turn to cause a stir during their electric performance of “Supermodel.”

The bare-chested David had no problem showing off his goods, wearing chaps that exposed his rear end. For at-home viewers, MTV zoomed out on the group’s performance various times while an undeterred David partied away with a group of clad dancers alongside him. Despite the camera tricks, Maneskin electrified the crowd in attendance and kept the vibes intact with their hit. In July, the rock quartet achieved its second No. 1 on Billboard’s Alternative Airplay chart after “Supermodel” landed at the summit. Their first was “Beggin,” which reigned supreme for 11 weeks last October.

In a May interview with Billboard, Maneskin gushed about the making of “Supermodel” alongside pop producer heavyweight Max Martin. “It was cool because Max and all of his team, they never tried to force us to do something that we didn’t want to do,” said David. “He basically wanted to understand how we work and how we’re used to making music and what makes us happy about music. He was very humble and said, ‘How can I help you to make it global?’ It was fun because we were used to writing only by jamming. This new thing of using computers and stuff was really mind blowing for us.”

Earlier in the night, Maneskin notched their first Moon Person after clinching a win for best alternative video for “I Wanna Be Your Slave.” In an interview with Entertainment Tonight, the foursome celebrated the historic victory, as they were the first Italian group to win a VMA award. “We didn’t expect to [win],” admitted David. “There’s a lot of great, great artists here, so it’s an honor for us, of course.”

Frontman Damiano David donned backless chops for their live rendition of “Supermodel,” which may have been too much even for the anything-goes award show.

Fans took to Twitter slamming MTV for either its “technical difficulties” or “censorship.”

“WHAT HAPPENED DURING THEIR PERFORMANCE???,” one angry fan questioned.

“What was w the performance not being fully seeen?? Technical difficulties? Something censored??,” one begged to know.

“I can’t believe that Maneskin has the most exciting set of the whole #vmas & MTV censored the whole d—set!!!! Justice for Maneskin!!!,” one angry user wrote.

Mäneskin performs at the 2022 MTV VMAs at Prudential Center on Aug. 28 in Newark, New Jersey.

“I waited until 5:30am for them and you show us 30% of their performance,” an Italian fan scolded the network.

“They would’ve been the most iconic performance this year if y’all didn’t sensor (sic) them,” another stated.

Earlier in the night, Måneskin took home a Moon Person for Best Alternative for their “I Wanna Be Your Slave” music video.

Massalong Pills Reviews: How Does it Work?

maria chloeComputers and TechnologyNovember 8, 2022
If my laptop is too far gone to be an easy sell, I may want to consider donating it to …
END_OF_DOCUMENT_TOKEN_TO_BE_REPLACED

Janna SharComputers and TechnologyJune 26, 2022
The global green methanol market size reached USD 3.71 Billion in 2021 and is expected to register a revenue CAGR of 6.0% …
END_OF_DOCUMENT_TOKEN_TO_BE_REPLACED

Janna SharComputers and TechnologyAugust 1, 2022
The global Automotive Actuators Market is projected to reach USD 41.09 billion by 2027. Rising automation and medical aid within …
END_OF_DOCUMENT_TOKEN_TO_BE_REPLACED